To continue to use this website you first need to accept the use of cookies. Without accepting cookies, you will not be able to use certain features such as the Member's Zone. For more information, read this page. 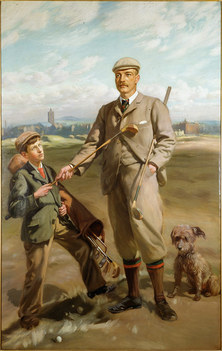 Perhaps the finest Accies golfer of them all… J H Lorimer’s portrait of the great F G ‘Freddie’ Tait with his terrier ‘Nails’ and a young caddy.

On 20th December 1900 twenty eight distinguished Academicals met at Dowells Rooms, 18 George Street, Edinburgh, to resolve that an Academical Golf Club be constituted in terms of a draft constitution which was approved. That evening, the first captain was voted in, none other than the legendary L M Balfour-Melville. The list of his sporting achievements is one of the greatest in the annals of Scottish sport: a triple internationalist, playing rugby, cricket and golf for Scotland (the Amateur Champion in 1895 at St Andrews and runner up in 1889); the captain of the Honourable Company and the R&A, president of the Grange Cricket Club, the Scottish Rugby Union and the Scottish Cricket Union; the Scottish long jump champion; the Scottish lawn tennis champion; and to top it off the Scottish billiards champion! In his spare time he practiced law.

Balfour-Melville was the first of many distinguished Academicals who came to dominate the wonderful game of golf in the amateur days of the mid to late 1800s. Others included Sir W Maitland-Heriot (who won the King William Medal at St Andrews in 1860 after pulling the stroke oar in the local lifeboat for five and a half hours in a gale), F R Charteris the 10th Earl of Wemyss (when 87 he partnered Harry Vardon in a match at Kilspindie – the venerable Earl, after playing his ball, mounted a pony and rode to the next shot), Dr W C Reid, A F Macfie, A Stuart and T Mansfield Hunter.

Perhaps the finest and most charismatic Academical golfer of them all was Lieutenant F G ‘Freddie’ Tait. Tait was twice Amateur Champion in 1896 (Royal St George’s) and 1898 (Hoylake) and runner-up in 1899 and competed in eight Open Championships, finishing third in 1896 and 1897. He was arguably the most famous golfer of his generation, much loved by all who knew him and was a keen supporter of The Edinburgh Academy and his fellow Academicals in all golfing matters. He was tragically killed in action in South Africa leading his men of The Black Watch in action against the Boers at Koodoosberg Drift on 3rd February 1900, aged only 30. It was a mark of the man that his fellow R&A members commissioned J H Lorimer to paint his portrait (alongside his beloved terrier ‘Nails’ and a young caddie) which hangs in the R&A clubhouse to this day. Many of Tait’s medals and other memorabilia can be found in the clubhouse of Luffness New Golf Club of which he was a founding member. The Club is very grateful to The Royal and Ancient Golf Club of St Andrews for granting permission to use J H Lorimer’s portrait of Tait on our website and further details about the life and times of the great man can be found by reading J L Low’s fascinating biography of 1900, ‘F. G. Tait, A Record; Being his Life, Letters, and Golfing Diary’. 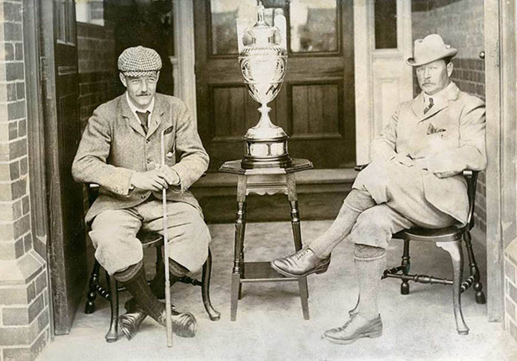 The Club exists today to foster the enjoyment and camaraderie of playing golf on top class courses in competition with fellow Academicals. The membership is growing and the benefits of being a member not only include playing in competitions, but also meeting and socialising with other members, thus opening doors to play courses throughout the UK and abroad.

We play competitive matches against other FP clubs particularly in The Halford Hewitt, The Grafton Morrish, The Cyril Gray and The Queen Elizabeth Coronation Trophy. There is a thriving under-30s section and also several opportunities for over-50s to play competitive golf. 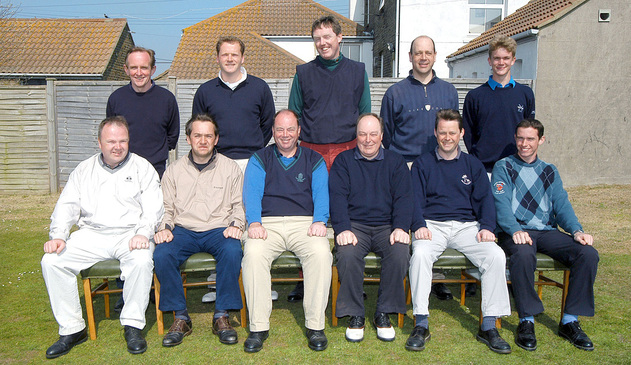 The Club also has a stated goal of encouraging and supporting the coaching and playing of golf at The Edinburgh Academy in order to ensure that EAGC continues to thrive for the next 100 years.

If you are an Academical and are keen on your golf, please don’t hesitate to contact us by clicking here

The Club wishes to acknowledge Ian Whyte’s excellent and authoritative book, ‘A Century of Edinburgh Academical Golf' (2002), as an essential source of reference material for the above abbreviated history of the Club. 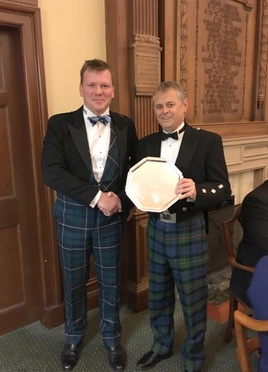